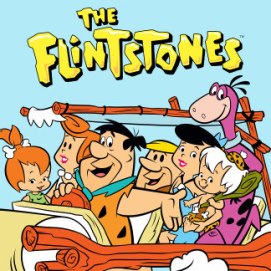 The very first animated series to be shown on prime time American television in the 1960s was, surprisingly, set in the Stone Age, somewhere dating back to around 10,000 BC. That was that – and then before we knew it, the two cheerful cavemen families went on to become the second greatest TV cartoon of all time, and one of my favorite shows ever.

A couple of fun facts about Hanna Barbera’s The Flintstones – Fred and Wilma Flintstone, Barney and Betty Rubble, not to forget Pebbles Flintstone and Bamm-Bamm Rubble too:

I vividly remember how melodious The Flintstones opening and closing credits were and Fred Flintstone’s heartful, full-throated ‘Yabba Dabba Doo!’