You know that quote “I think, therefore I am”? Yep, René Descartes said it – our beloved Mathematician of the month. The French philosopher had so many brilliant ideas, he had to stay in bed almost all day just to be able to wrap his mind around them (it might have to do with him being sickly, but we’ll ignore that for now)

His specialty is Geometry – you know, the math of beautiful shapes. One day while he was lying in bed, waiting for breakfast to be brought to him (philosophy seems a great career if you ask me), he observed a fly crawling around the ceiling. When his maid arrived with breakfast, he tried to tell her where the fly had been without pointing it out to her. This obsession led to him chancing upon his greatest idea – grids with axes.

While we give directions in relation to the most recognizable landmark, “along the corridor, second door to your left”, he created grids with numbers. So the fly started at 4,2 which means 4 along the grid and 2 up. The maid rolled her eyes and walked away slowly, refusing to acknowledge the importance of his discover. Within a few years, however, it started being used in Math, Physics and even Geography and is popularly called the Cartesian coordinates. 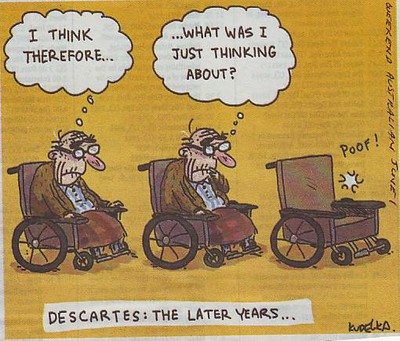 Personally, thinking causes me a lot of confusion and so for now, it’s on hold! To be continued …